In the middle of March (07-25.03.2022), the first measurement campaign with human patients took place in the University Clinical Center of the Medical University of Warsaw (WUM) on Banacha street, Warsaw. This research was performed using the Modular J-PET prototype, which consists of one layer of cylindrically arranged 24 modules of plastic scintillators.

On the first day (07.03.2022), the tomograph together with all the electronics (cables, server etc.) was transported from UJ Physics, Astronomy and Applied Computer Sciences faculty to the WUM hospital. After one day of assembling the tomograph in the hospital, the trial measurements with a uniformly filled cylindrical phantom were done. On 10.03.2022 a measurement with the NEMA IEC phantom was performed.

On Friday (11.03.2022) the first measurement of a patient with the J-PET tomograph took place. This started a two-weeks long measurement campaign with human subjects. In this campaign, the imaging tests were done on patients subjected to either head or torso region. Additionally, a measurement of a 44Sc radioisotope has been performed together with researchers from the Heavy Ion Laboratory at the University of Warsaw.

Many thanks to all WUM University Clinical Center and UW Heavy Ion Laboratory staff, as well as members of the J-PET group, who were a big part of this project. 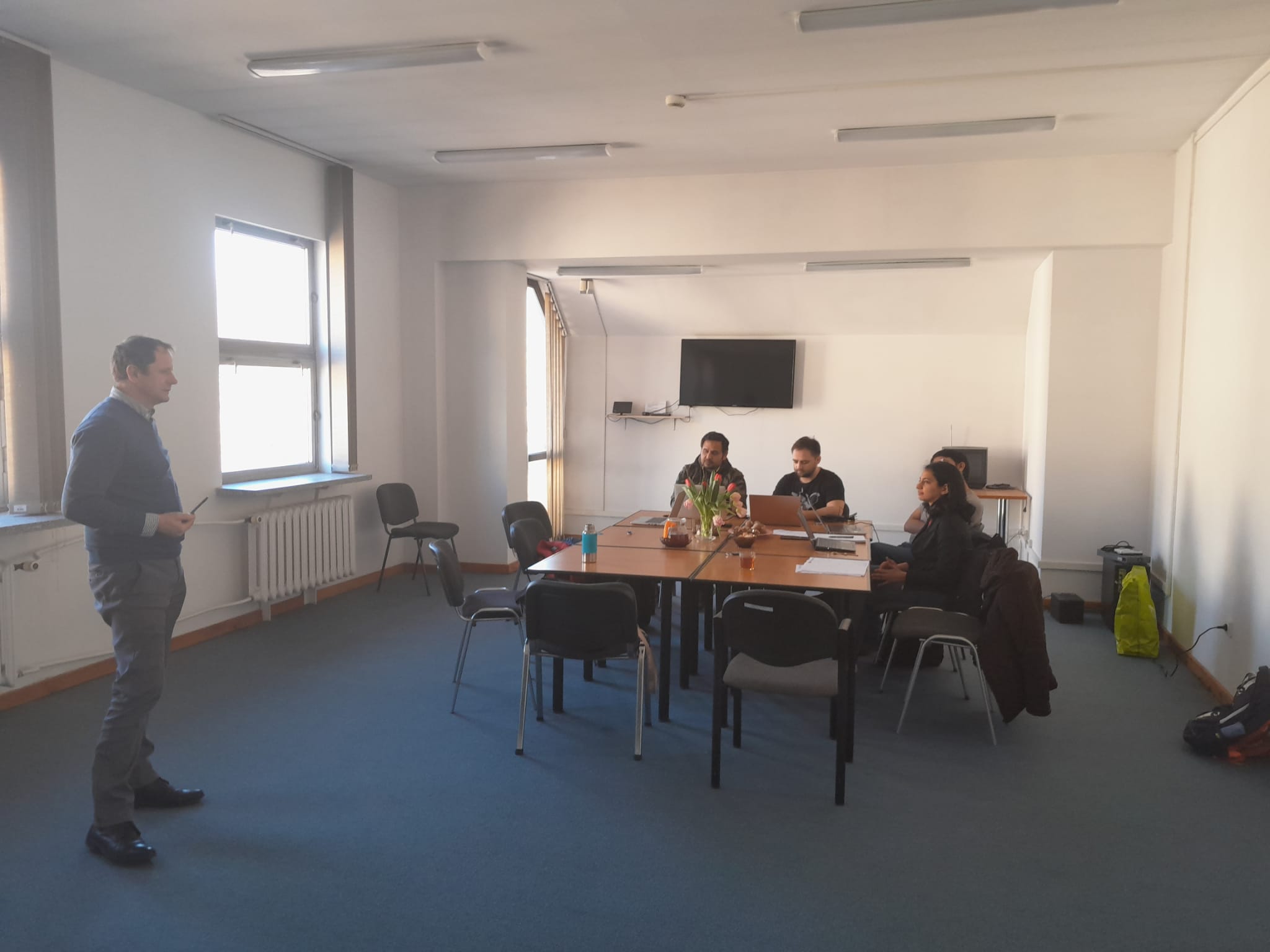 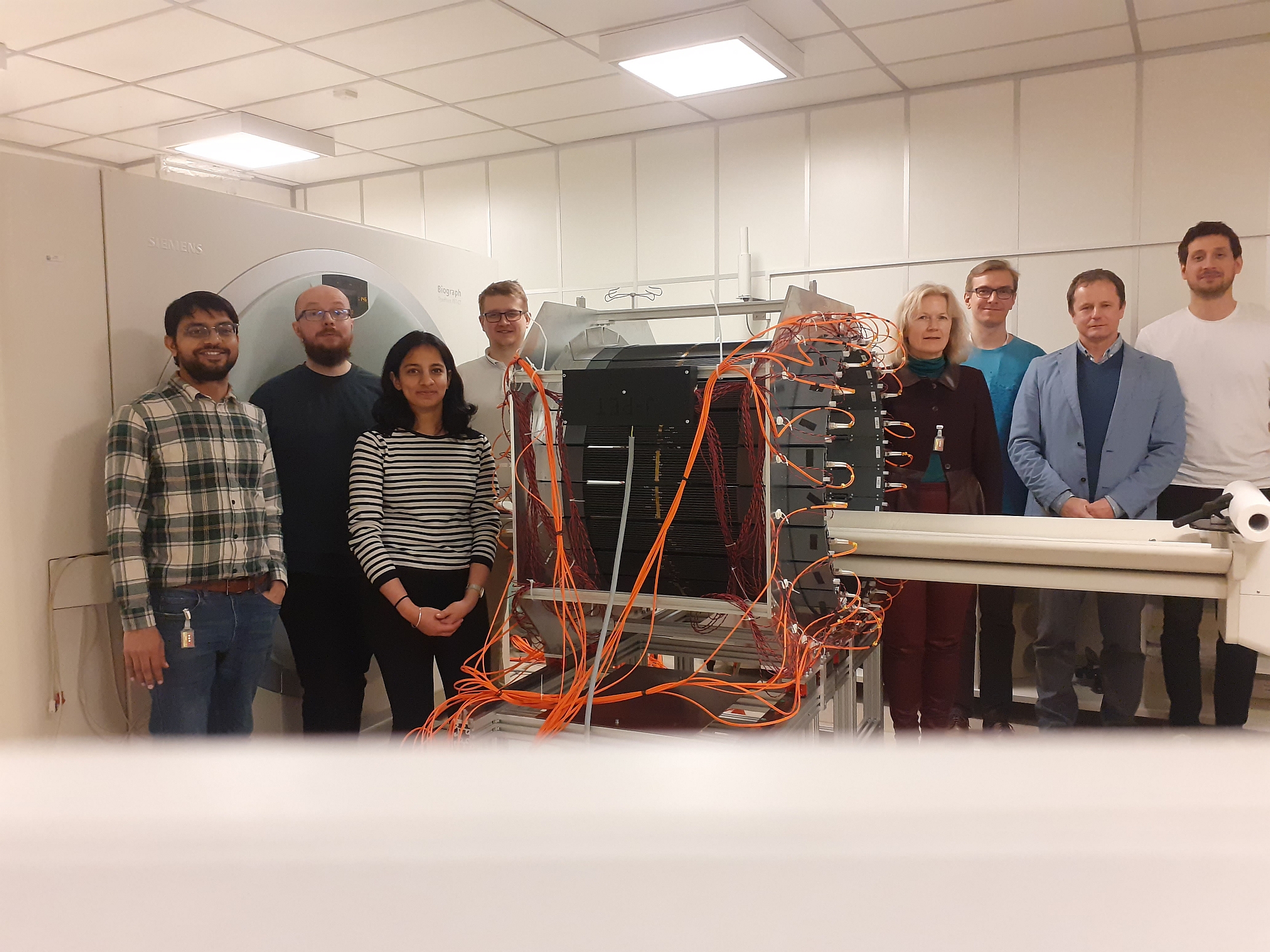 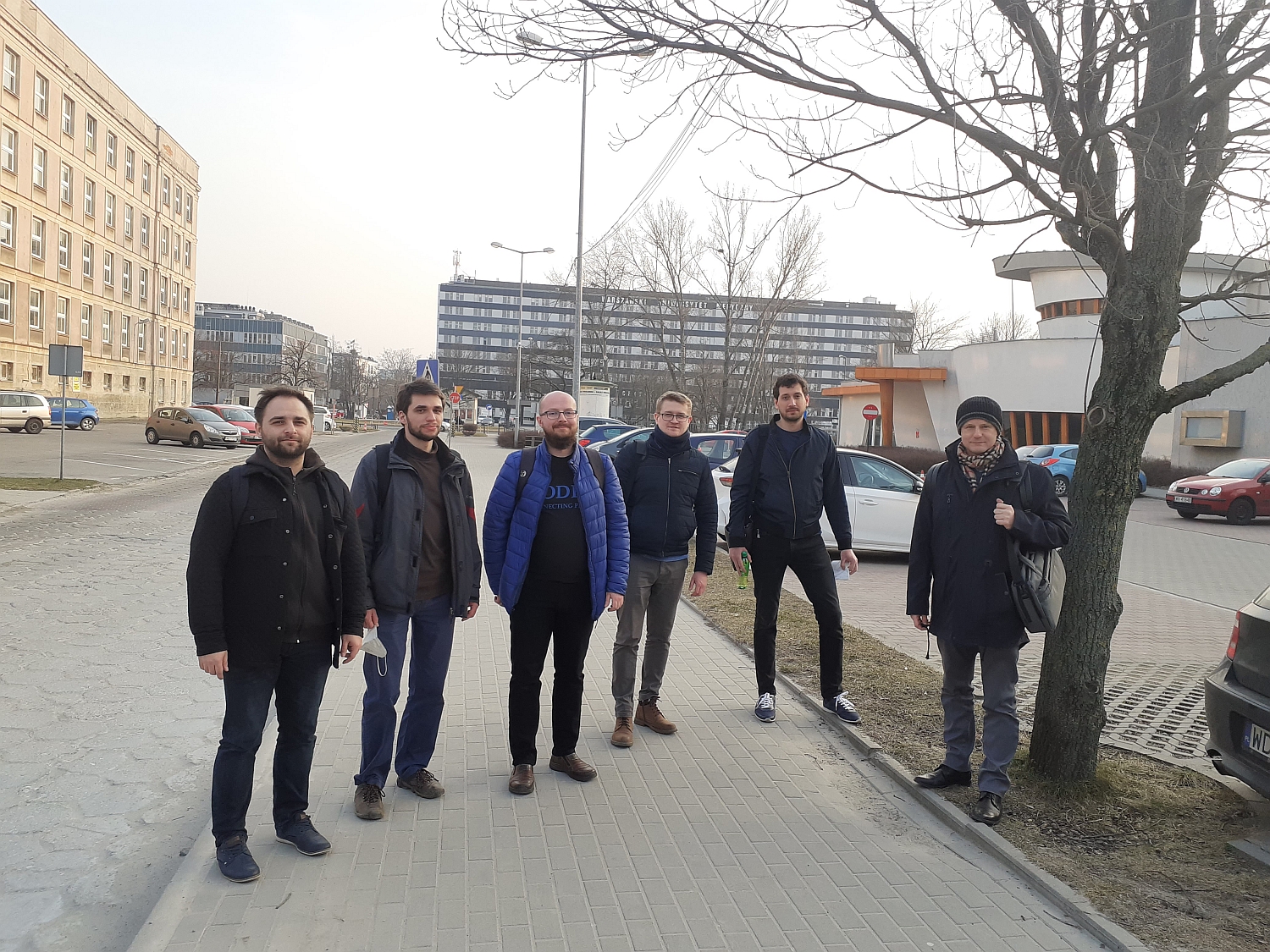 Invited articles connected to the symposium have been published in the special volume of Bio-Algorithms and Med-Systems edited by Prof. E. Stępień and Prof. P. Moskal

In the middle of the October the experiment aimed at measuring the range of irradiation using proton beam in different phantoms was conducted. This experiment was carried out at the hadron therapy center in the Nuclear Physics Institute, which is a part of Polish Academy of Sciences and is located in the north part of Kraków (Bronowice).
This research was performed by using modified version of already existing modular J-PET prototype - dual-head, which was designed especially for this experiment. The measurements were possible due to the fact that during proton beam irradiation, the small fraction of protons is able to convert some elements (like carbon, nitrogen or oxygen) into their beta+ radioactive isotopes: 11C, 13N and 15O. This means that after emission of a positron and its annihilation with an electron, two gamma quanta that are produced can be used to measure the annihilation position, which in turn is correlated to the position of isotope production by the proton beam. Measurements will give the possibility to study this correlation during the proton beam irradiation, which was never successfully performed before. In the facility where the experiment was conducted mainly tumors located in inoperable positions are treated, especially those located very close to vital organs, e.g. brain. Thus knowing exact depth of proton interaction and possibility to modify it in a fast way is pivotal.

Above-mentioned dual-head is a device consisting of two separate heads. Each of the heads consisted of 12 modules (in total 24 modules). Single modules were ordered into three layers and each layer consisted of four modules. Details of the dual-head construction can be seen in Figure 1.
On the first day of the experiment (16.10.2021r.) dual-head setup was transported from UJ Physics, Astronomy and Applied Computer Sciences faculty to the Hadron Therapy Center in Bronowice. Dual-head along with all the electronics (cables, server etc.) was transported in boxes filled with foam in order to minimize the possibility of any damage. During the first day two heads were assembled and trial measurements with weak radioactive source were conducted in order to see if all the parts of dual-head device are working. This part was done by dr Szymon Niedźwiecki, dr Grzegorz Korcyl, Maciej Bakalarek and prof. Paweł Moskal (Figure 2.).

First off beam measurements were conducted on 18.10.2021 and they were continuing throughout the week, until Sunday (24.10.2021r.). During off-beam measurements PMMA phantoms were placed on the clinical table, then they were irradiated by proton beam and transported to the other room where the dual head device was stationed (Figure 3). After first off-beam measurements some initial data analysis was performed, thanks to help of dr Aleksander Gajos (Figure 4).

On Sunday (23.10.2021) whole set-up was transported to the room where the patients are treated. Dual-head was placed on the clinical table and the nozzle, from which the beam is coming was placed directly above the irradiated phantoms (Figure 5). Unfortunately, measurements had to be rescheduled to another day due to the cyclotron malfunction.

On Sunday (24.10.2021), after the beam was working and was stable again on-beam measurements were conducted. Similarly as with previous measurements, PMMA phantoms were irradiated and additionally, CIRs phantom was irradiated (Figure 6).

All the measurements were supervised and controlled from the control room (Figure 7), which was located right next to the therapy room where the irradiation took place. Many thanks to dr inż. Jan Gajewski, dr Antoni Ruciński, dr inż. Marzena Rydygier, all CCB staff and members of J-PET group, who were a big part of this project (Figure 8). 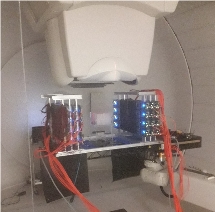 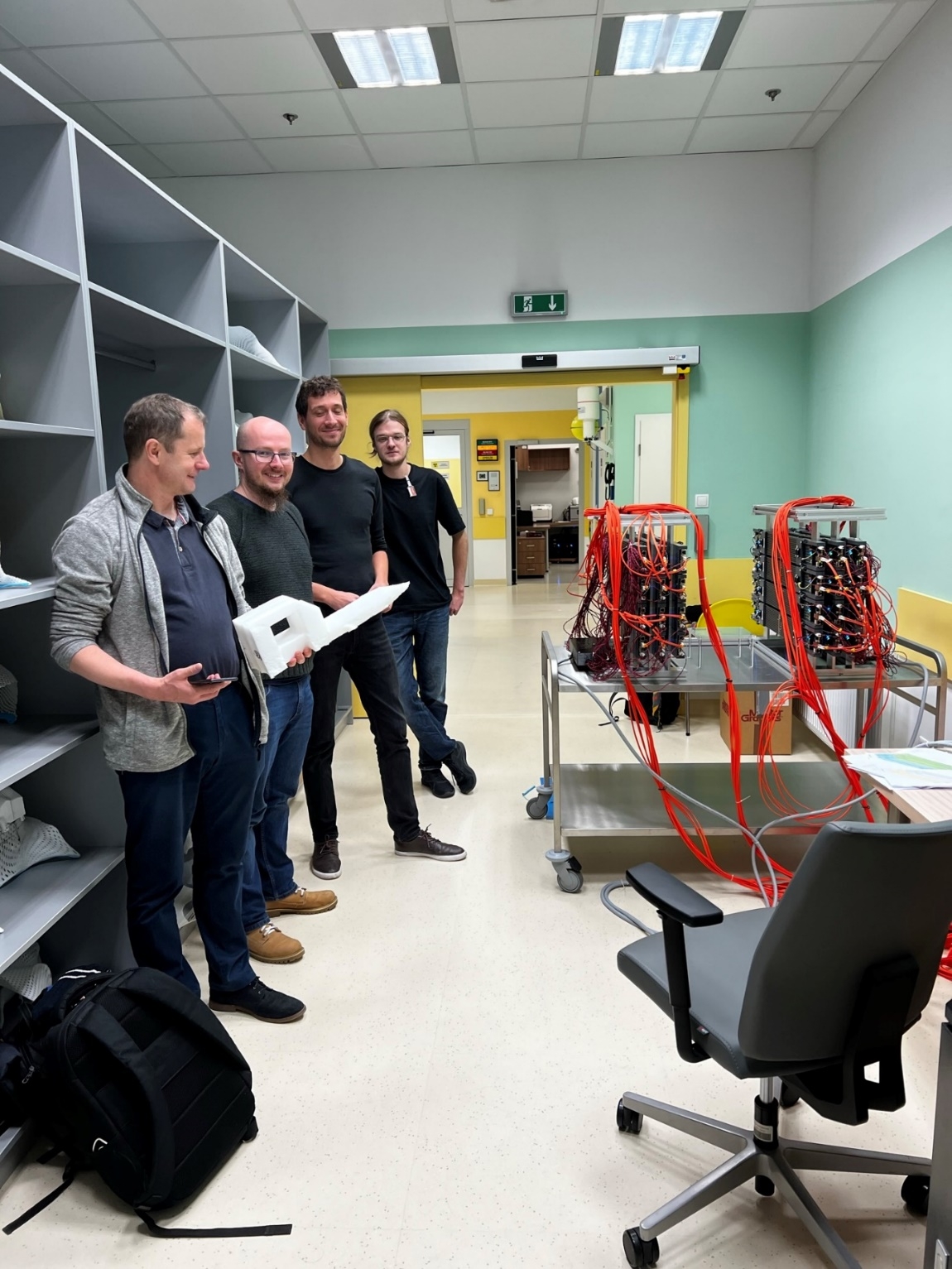 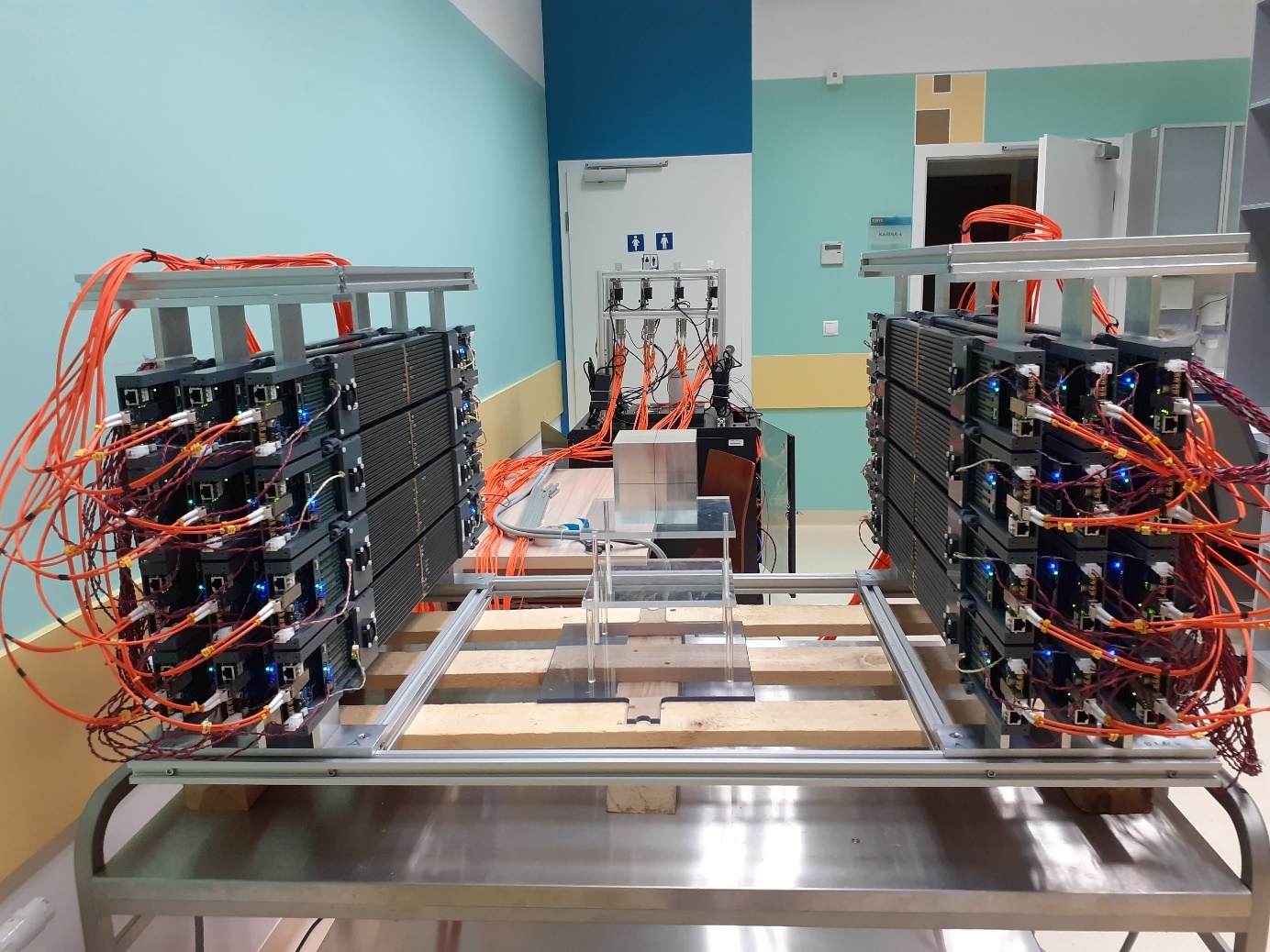 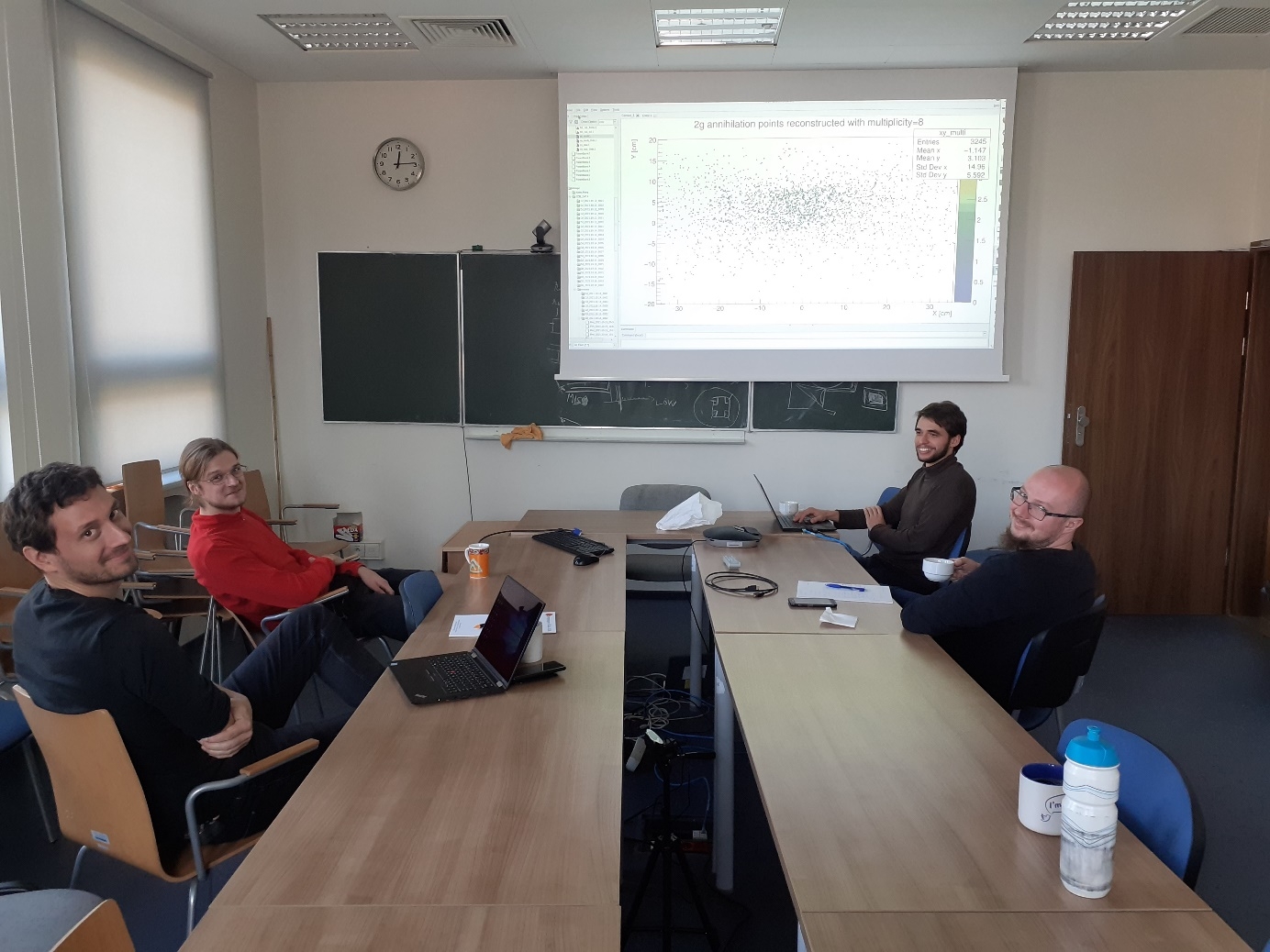 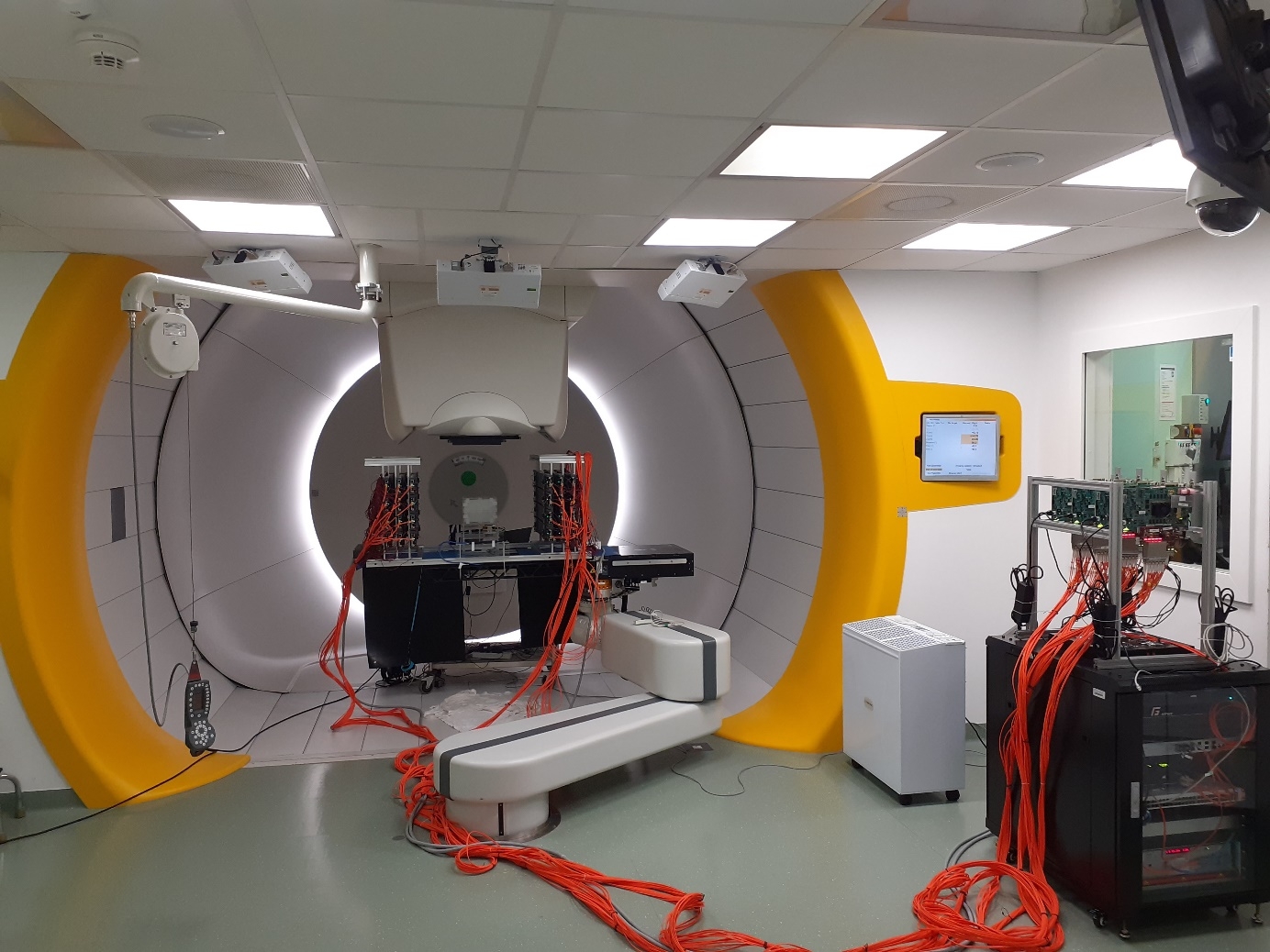 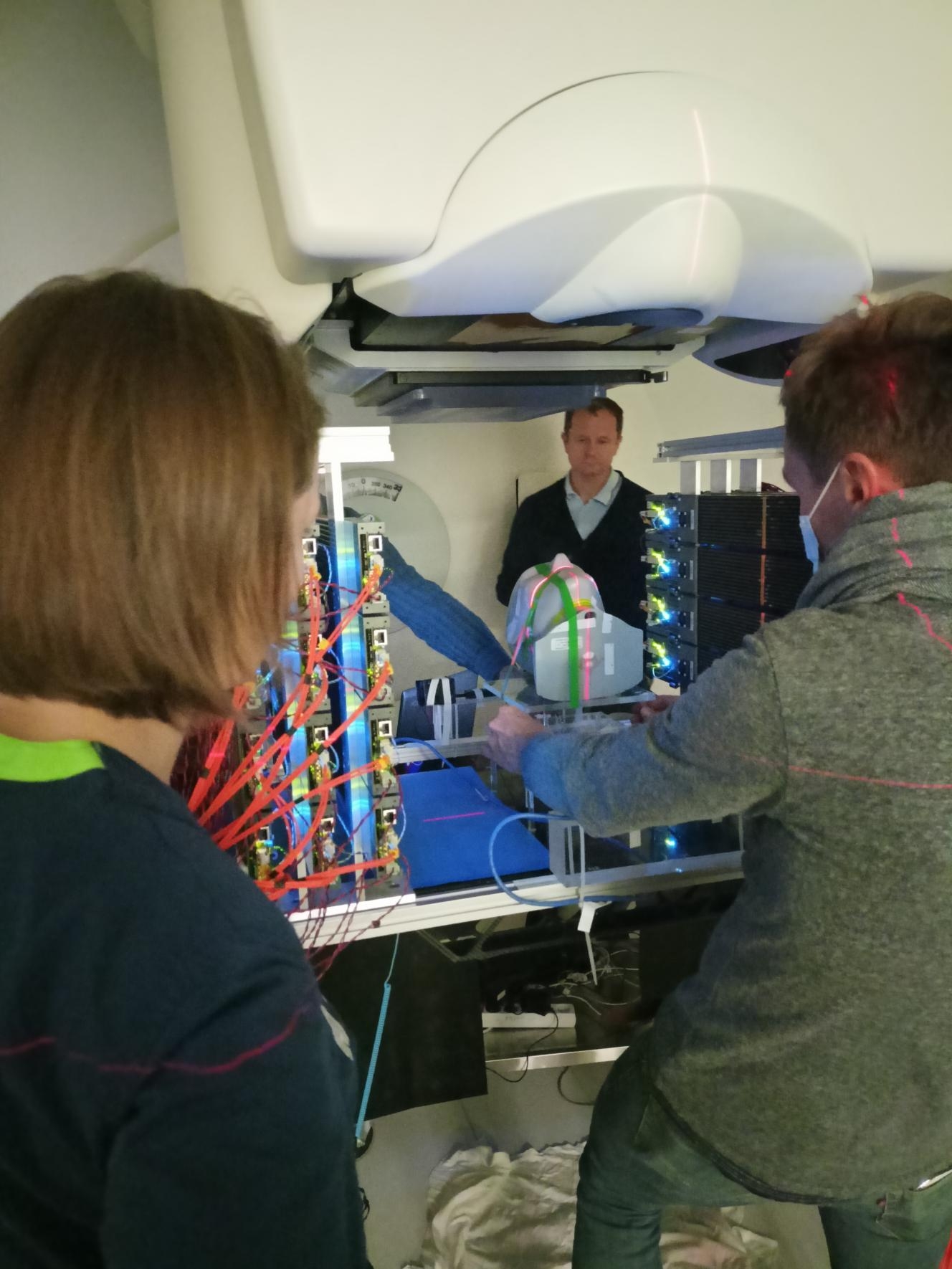 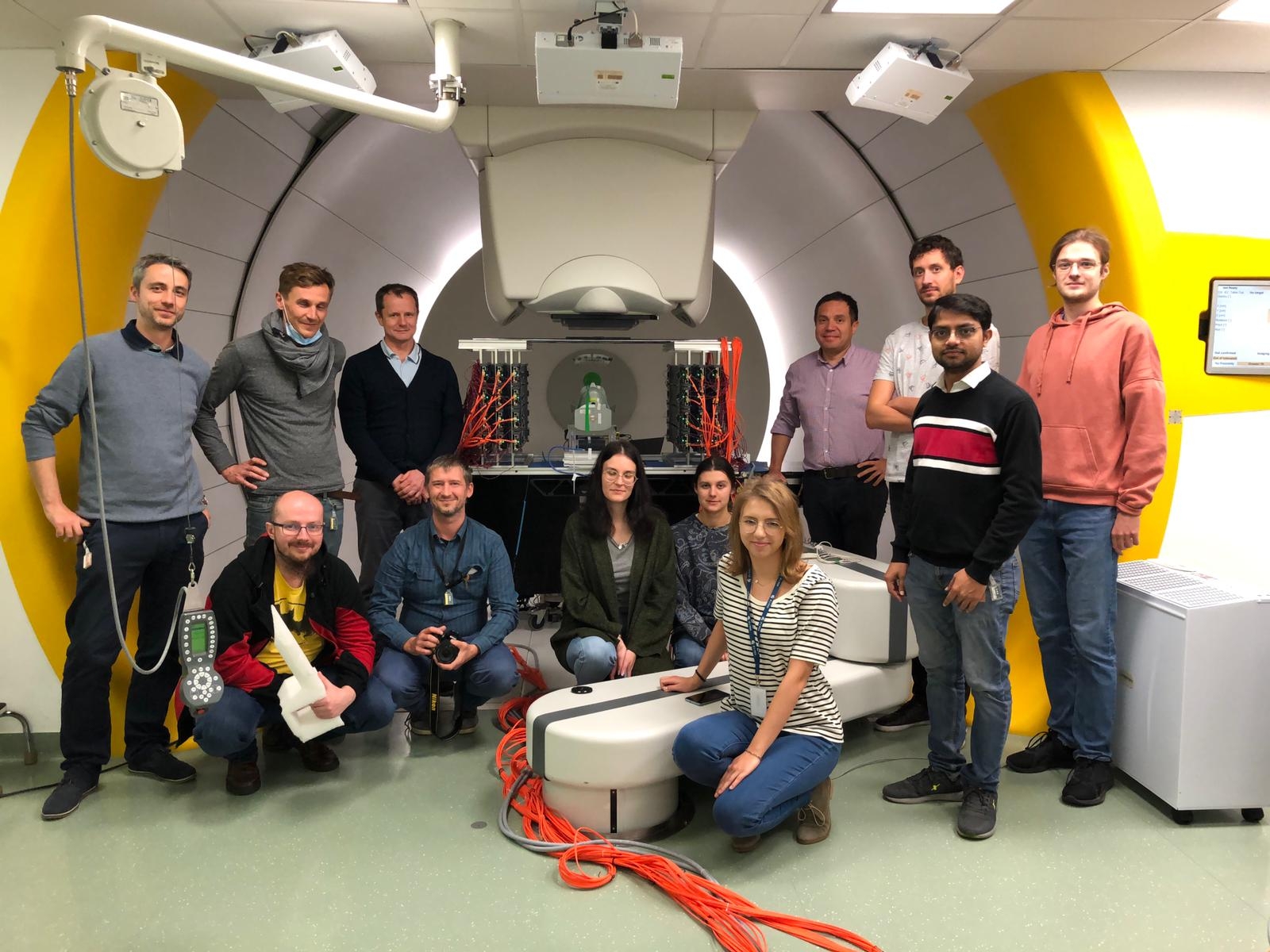 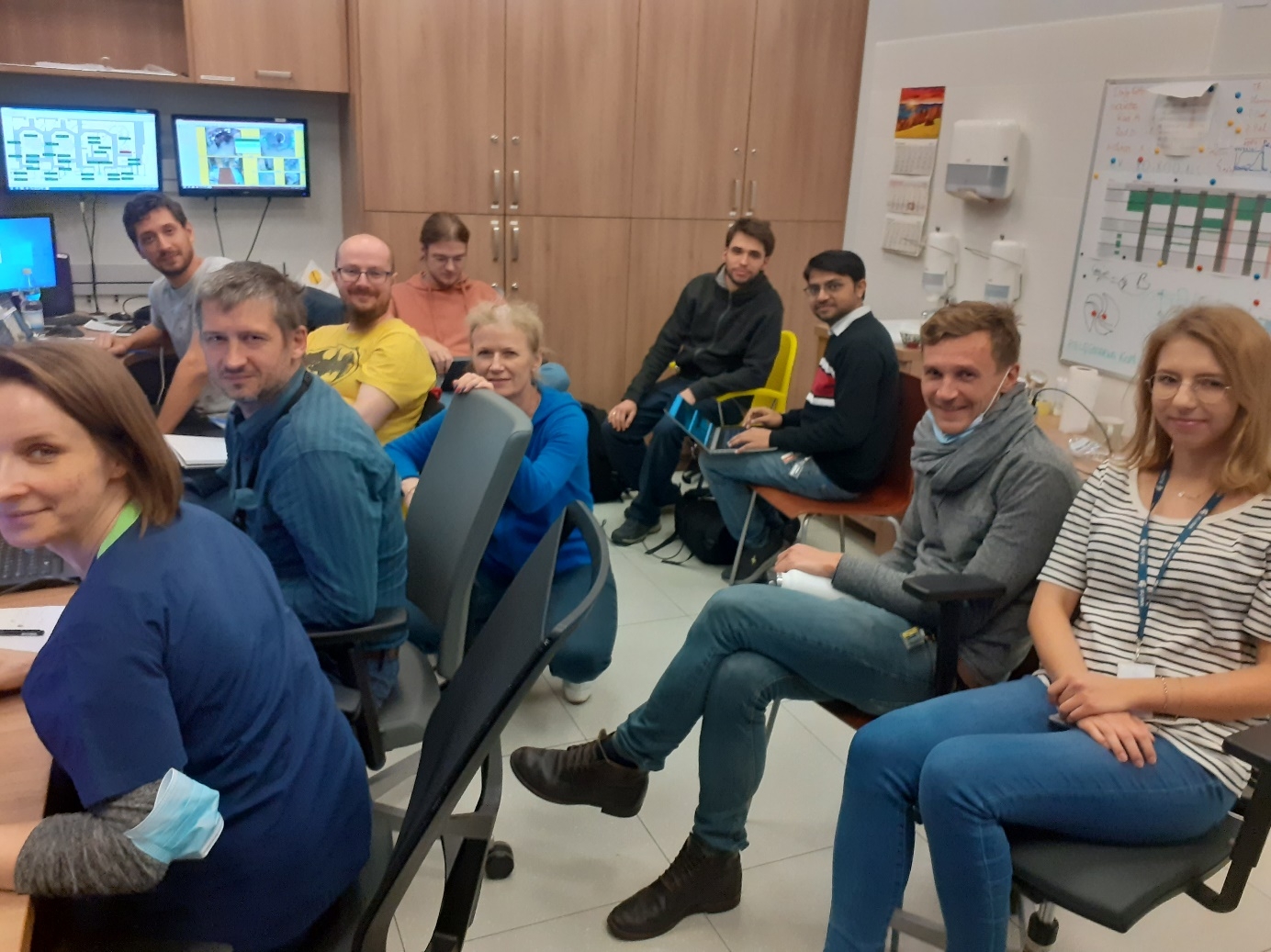 A list of lectures for diploma and PhD students from the first and second year in the Department of Experimental Particle Physics and Applications, organized via teleconference as a chance to acquire knowledge which will be useful in their research in these strange times:

During the National Education Day celebration at Jagiellonian University professor Paweł Moskal received the Silver Cross of Merit awarded by the president of Poland.

The official opening of the J-PET laboratory took place on October 1st, 2019. The ceremony was recognized in the TV, radio, in press and by the Polish Press Agency.